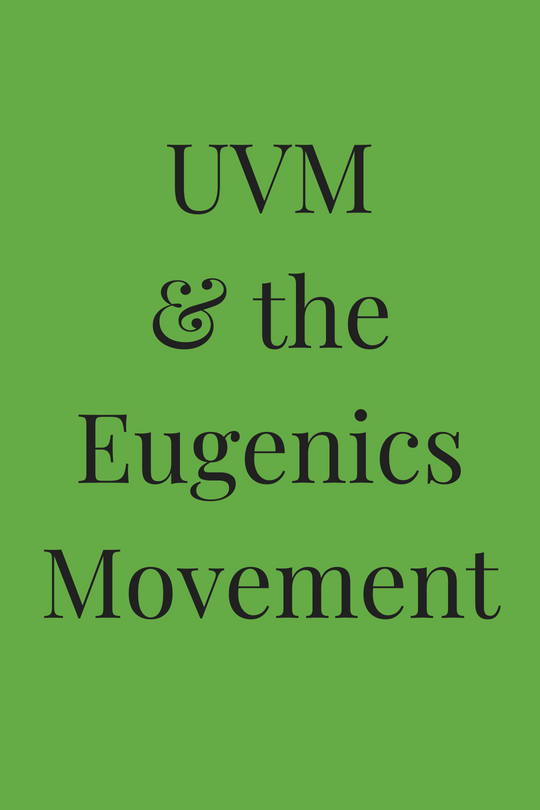 An exhibit in the Bailey/Howe Library lobby examines the history and timeline of the eugenics movement at the University of Vermont from the 1920’s to the 2000’s. The exhibit will remain on display throughout the fall 2018 semester.

The Merriam Webster dictionary defines eugenics as, “the practice or advocacy of controlled selective breeding of human populations (as by sterilization) to improve the population’s genetic composition.” Progressive reformers in the early twentieth century theorized that a broad range of individual and social ailments, from criminal activity to alcoholism to poverty, might have roots in genetics.  Despite the lack of scientific methodology or any reliable evidence, eugenicists looked for patterns of physical, mental, and social degeneration within families—a concept that fed into wider racial and class prejudices.

In the 1920’s and 1930’s, the field of eugenics was promoted at the University of Vermont through classes, research, and publications. In 1931, informed by the work of University of Vermont faculty member Henry Perkins and others, the Vermont legislature passed a sterilization act. The growing public voice of Vermont’s Abenaki Indians, beginning in the 1970s, brought to light stories of involuntary sterilizations. In the 1990’s, scholars and artists turned a critical eye to the eugenics movement in Vermont.

This exhibit is meant to give an overview of eugenics and its association with the University of Vermont, with resources for additional information.