One fascinating international story that is described in Vermont’s papers is the Spanish Influenza of 1918. The Middlebury Register chronicled this tragic episode in vivid detail.

In 1918 and 1919, the Spanish Flu  killed millions of people worldwide. In the U.S. alone, it killed in over 600,000. And young adults were particularly affected. In Middlebury, a town of about 2,900, the flu struck in late September and killed over a dozen people in the first month.

The flu strikes twice in 1918. Once in the spring in a mild, typical form and later in the fall in a much more deadly strain. Before it took on its deadly form, the flu is described  in everyday language, in the context of  local visits, travel plans of community residents, and dramatic performances. 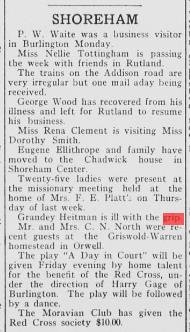 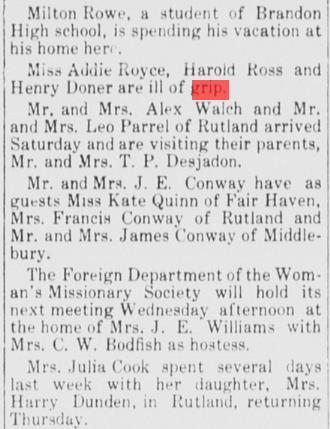 The disease is referred to as “the grip”, or the French “lagrippe” or simply “grip” with the definite article dropped.  Grip can seize one suddenly, confining one to bed, sometimes for several weeks.

The Middlebury Register carried advertisements for flu remedies sold at local pharmacies, such as Foley’s Honey and Tar, which could be used to cure everything from  the common cold to  more serious illnesses. These ads characterized the flu as a fairly banal seasonal illness. 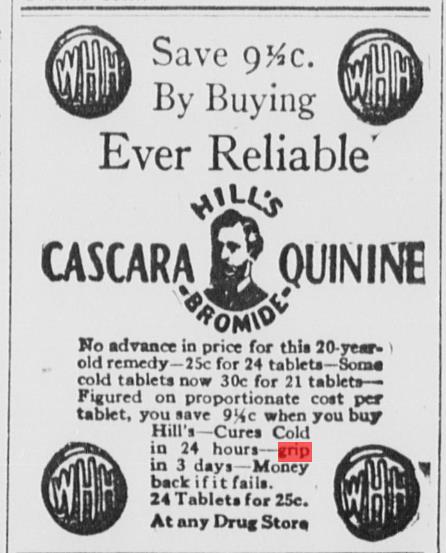 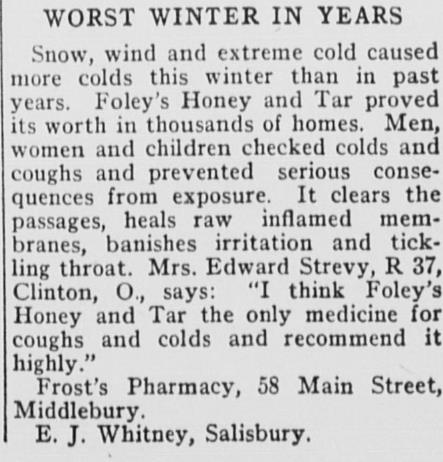 The extremely contagious, deadly form of influenza was to hit Addison County in the final week of September 1918. On September 27, it is reported as affecting 26 states. By October 4, the number of states affected as increased to 43.

At Middlebury College of the 490 students enrolled at the time, over a quarter are ill.  Middlebury College, which had been coeducational since 1883, quarantines men and women in separate infirmaries. The College is placed under martial law. Armed guards confine students to campus. 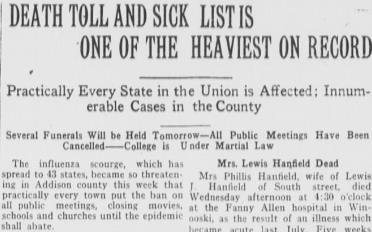 In this time of crisis, the town looks to their local public health officer, doctor Stanton S. Eddy for authoritative information and guidance.  Eddy was from a prominent, civic-minded Methodist family. He and his father regularly served as officers of such organizations as the Addison County Medical Society. Dr. Eddy is interviewed by the Middlebury Register and presents the facts of the disease and preventatives steps that townspeople can take to avoid it. These include spraying the throat with an antiseptic solution. 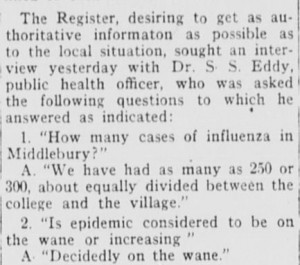 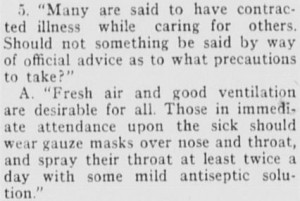 The local pharmacies take note of this advice in their advertisements: “Get an atomizer and some good antiseptic. Spray the throat and nose.” 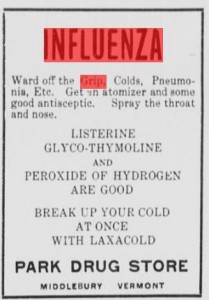 Eddy issues a ban on public gatherings, including movies and church, closing the schools, and cancelling special events. Families with sick warn others to stay away with red “Influenza” placards. The Vermont state board of health extends the ban on public gatherings across the state.  With churches closed, pastors recommend that “devotional services of some sort at home be substituted as an observance of the Sabbath.” 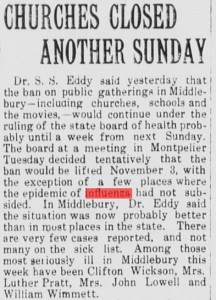 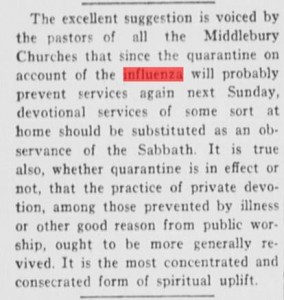 Within just three weeks, the Middlebury Register is reporting that the flu is abating. School work resumes at Middlebury College, but an armed guard still patrols campus and a pass is required of any student seeking to leave “the hill” to enter the village of Middlebury. 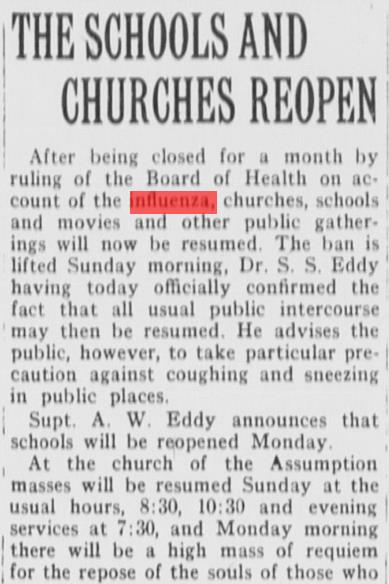 However, influenza is  just getting started in neighboring towns. In late December it hits Shoreham.  At the beginning of January, the Middlebury Register reports 200 cases of influenza in Bristol with 4 deaths in a single week.

Of the 53 deaths in Middlebury in 1918, many were attributed to the flu. And the Middlebury Register takes note of the toll of the disease on the young. The disease was to leave many children orphans. When Jerry Degray, a Middlebury marble worker dies, he leaves behind 5 children under the age of 17 with no nearby relatives. 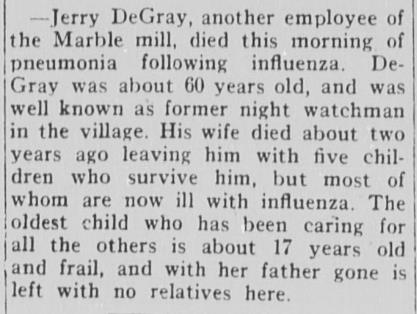 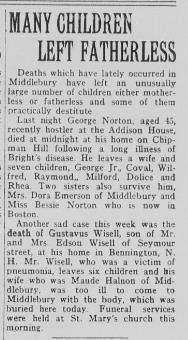