In addition to newspapers in geographical areas not covered under Phase 1, as well as anti-slavery titles, the VTDNP Phase 2 grant proposal emphasizes Italian language and French language newspapers from historically important immigrant populations in Vermont. This article features information about French and Italian newspapers that were published in Vermont in the 19th- and early 20th century to be included in the Phase 2 digitization effort.

In August, with Phase 2 planning underway, Tom McMurdo and Birdie MacLennan traveled to the Aldrich Public Library in Barre and to the Department of Libraries in Montpelier to research information about existing master negatives for Italian and French language newspapers in our database, notably these two historically weeklies: Le Patriote canadien, the first French-language newspaper published in New England, and Cronaca sovversiva, Luigi Galleani’s anarchist newspaper, which started in Barre and was published there for nearly a decade.

In Montpelier, we examined service copies of Le Patriote canadien, published from 1839 to 1840 by the well-known French-Canadian printer and journalist, Ludger Duvernay. 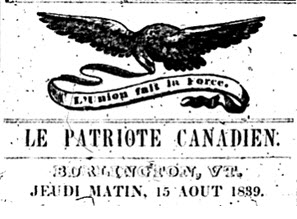 Upon further investigation, we discovered that the University of Vermont holds the master negative for this title. Duvernay came to Vermont in the wake of the 1837-1838 Patriot Rebellion of Lower Canada. A printer by profession, he published a number of newspapers, including the Gazette des Trois-Rivières  and La Minerve which supported the Parti Patriote and Louis-Joseph Papineau in the years leading up to the Rebellion. On November 16, 1837, facing an arrest warrant, his printing office was sacked and he was forced to flee. Duvernay was appointed officer of a small Patriote battalion and, on December 6, 1837, took part in the Battle of Moore’s Corner, near Saint-Armand, along the border with Vermont. Defeated, he took refuge in Vermont.

Duvernay found a more liberal environment in Burlington for expressing his views of the injustices of the regime in Canada. In 1839, in Burlington, he launched Le Patriote canadien to rekindle the flame of the Patriot refugees. However, he also treats the local scene and includes events of interest about the Burlington area. Le Patriote canadien is recognized as the first French-language newspaper to be published in New England. It also includes translations and texts in English.

At the Aldrich Public Library in Barre, we met with Library Director, Karen Lane, and researched master microfilm availability for Italian-language newspapers published in Barre. The granite industry, centered in the Barre area, attracted waves of Italian immigrants to the state and at the turn of the century, there were eight Italian-language newspapers published in Barre. The upshot of the Barre meeting is that we have been able to locate master microfilm availability for two important newspapers with Italian language content: the master negatives for the Barre Evening Telegram are available at the VSARA. This newspaper briefly published an Italian section (“Parte Italiana”) from December 27, 1898 to January 2, 1899, until the section was discontinued (presumably because of anarchist sentiments expressed by the editor). Much of our discussion with Ms. Lane focused on the high level of historical interest in Luigi Galleani’s anarchist publication, Cronaca so!
vversiva (1903-1920) which originated in Barre and reported such news as Emma Goldman’s lectures in Barre and activities of the Industrial Workers of the World (IWW or Wobblies).  Initial examination of the service copies indicated a trail to a microfilming agency in the Netherlands. However, further correspondence in the wake of our visit led to Ms. Lane putting us in contact with scholar Robert D’Atilio, in Medford, Massachusetts, who had donated print copies of the Cronaca to the Boston Public Library in the 1970s for microfilming. Tom subsequently contacted Chrissy Rissmeyer, Digital Projects Coordinator at the Boston Public Library (BPL), to inquire about availability of the master negatives, and found that the BPL does indeed have the complete run of negatives for the Cronaca and that they would be willing to loan the negatives to the VTDNP for digitization under the NDNP.

The VTDNP interest in the Cronaca dates back to August 2010, following press releases about the NEH award for Phase 1 of the VTDNP. At this time, Karen Lane contacted Project Management Group  member Lorraine Lanius at the State Library to advocate for digitization of the Cronaca: “Since coming to Barre in 1977, I have been aware of the rich ethnic diversity of the community and the keen interest of scholars worldwide in the six or seven Italian-language newspapers that were published here. By far the most significant of these is the Cronaca sovversiva and its perennial value and interest to researchers has always impressed me. Cronaca sovversiva is described by Dirk Hoerder in his annotated bibliography, The Immigrant Labor Press in North America, 1840s – 1970s (NY: Greenwood Press, 1987) as having had a ‘very strong influence on the Italian-American anarchists,’ of whom there was a large continent in Barre in the early 20th century!
. Its editor, Luigi Galleani, was the leading Italian anarchist of his day, a man who continues to inspire scholarly research a full century later. Please see Paul Heller’s excellent article on Luigi Galleani and the Cronaca Sovversiva in  the Times Argus: http://www.timesargus.com/article/20100430/THISJUSTIN/100429957.”

We gratefully acknowledge Karen Lane’s interest in seeing Vermont’s Italian language content and heritage represented in Chronicling America. We are also very grateful to Chrissy Rissmeyer and her colleagues at the BPL, including Henry F. Scannell and Tom Blake, for their gracious collaboration in our quest for the negatives. 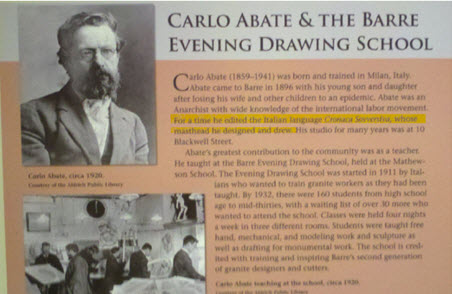 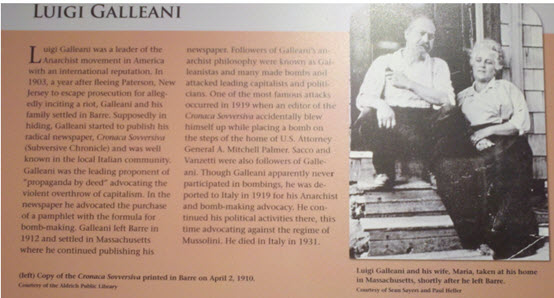 Heritage Gallery, Vermont History Center, The Emergence of the Granite City: Barre 1880 to 1940. During the period covered by the exhibit, Barre’s population increased from 2,206 to 11,855 in less than fifteen years, and it became known as the granite center of the world. Mark Hudson, Executive Director of the Vermont Historical Society, notes that, “In addition to their diverse customs and languages, many of the new residents also had political beliefs that contrasted with the natives. With immigrant populations from French-Canada, Scotland, Italy and many other European countries, Barre became a cosmopolitan city distinct from others in Vermont.”
http://www.vermonthistory.org/index.php/vermont-heritage-gallery.html