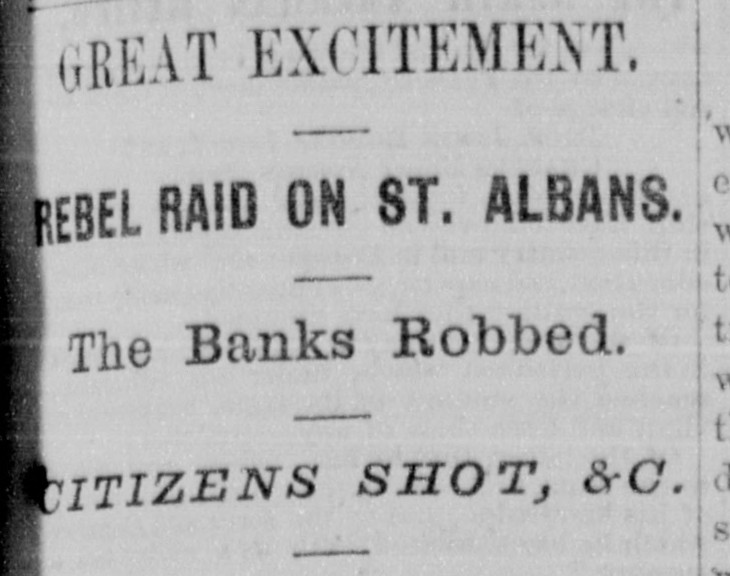 “The town is full of the wildest rumors, and speculation runs rife,”     reported the Vermont Transcript on October 21, 1864, only a few days after the northern-most land attack in the Civil War in the town of St. Albans on October 19th, 1864.

The raiders first appeared a few days earlier, staying at a variety of St. Albans lodgings, according to the Vermont Transcript:

After dinner on October 19, 1864, there was a number of men strolling about the Main Street, apparently quite nonchalantly, which elicited some curiosity from the unsuspecting townsfolk.  Around 3:15 pm groups of 4 to 6 men entered three banks in St.      Albans simultaneously and chaos ensued.

Those in the St. Albans Bank, as reported by the Lamoille Newsdealer, were held at gunpoint:

The Franklin County Bank was a victim, as well. According to the         Vermont Transcript, “four well-dressed strangers” approached the cashier and another man in the bank at the time:

The First National Bank of St. Albans was targeted, too:

The Confederates not charged with robbing the banks, brought bystanders out to the green under gunpoint. Within a mere fifteen minutes, the robberies were completed. Following the raid, with a total of $208, 000 stolen and 16 stolen horses,  the Confederates “leisurely” rode through town shooting at townspeople, killing one, and scattering loose bills as the “ruffians” made their way back to Canada:

By October 22nd, fourteen of the raiders were reported caught and imprisoned in Montreal, with only $88,000 in hand. The raiders were examined in Montreal and witnesses from St. Albans were called in to testify in the Canadian court; this was covered by the      local newspaper and re-posted in the Vermont Transcript and are worth reading [Article 1, Article 2,  Article 3, Article 4, and the Judge’s decision].

Following the trial, the judge declared the prisoners should be               released in December 1864, due to Canada’s neutral position in the war, and a few days later, the most of the raiders headed west. Five of the men remained imprisoned. One of them, Lt. Bennett Young, the leader of the raiders (a.k.a.,”T.B. Clyde”), wrote to a paper concerning his belief that Canada was acting beyond its pledge for       neutrality by imprisoning them. He also stated his goal in the executing of the Raid, which had been approved of by the Confederacy: “I went there for the purpose of burning the town and surrounding      villages in retaliation for recent outrages in the Shenandoah Valley and elsewhere in the Confederate States.”

In that same month, the St. Albans Messenger received an unlikely newspaper subscriber: Young. The Transcript, their competition, jumped on the Messenger‘s excitement, commenting, “Our co-temporary is perhaps not wise in pocketing either the insult or the money.”

On March 9, 1865, a trial was concluded for the final five remaining in Canadian control. Again, the court declared it had no jurisdiction for wartime acts. The men were released in April. Young was kept a few months longer, but later released with no charges. Following the April trial, the $88,000 of the missing funds were returned from a Canadian bank, which had held the money until after the last trial. Much of the money was still missing.

Today, should you wish to visit the banks, only the Franklin County Bank still stands on Main Street, with, perhaps appropriately, a bank (TD Bank) still operating within it.

Visit the St. Albans Raid website, created by the St. Albans Historical Museum, for more information, images, and a comprehensive look at the Raid and its aftermath.