Now available on Chronicling America, our first French-language title, Le Patriote canadien! Published from 1839 to 1840 by the well-known French-Canadian printer and 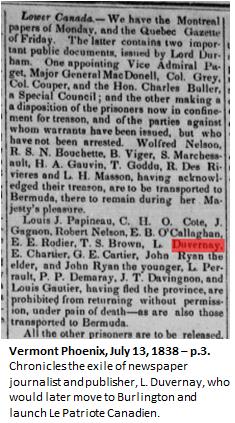 journalist, Ludger Duvernay, Le Patriot!
e canadien is an enduring chronicle of the ties between Vermont and Québec during an important period of history.  The Rebellion in Lower Canada / La rébellion du Bas-Canada in 1837-1838, marked the culmination of a long political conflict  between the civil population of Lower Canada (now Québec) and the forces of the colonial British government. As tensions mounted, armed clashes erupted between the rebels or ‘patriotes’ and the British. Martial law was declared, and many patriots were exiled under pain of death. Claiming civil rights and the establishment of an independent Canadian Republic, many of the exiles fled across the border to Vermont. In the wake of these circumstances, in August 1839, Le Patriote canadien emerged in Burlington, published by Duvernay, a prominent exile and consummate journalist, as an organ of dissemination and communication to flame the fire of rebellion again!
st the injustices of the colonial regime.

A printer by profession, Duvernay published a number of newspapers in Canada, including the Gazette des Trois-Rivières  and La Minerve which supported the Parti Patriote (the Patriote’s political party) and Louis-Joseph Papineau in the years leading up to the Rebellion. On November 16, 1837, facing an arrest warrant, his printing office was sacked and he was forced to flee. Duvernay was appointed officer of a small Patriote battalion and, on December 6, 1837, took part in the Battle of Moore’s Corner, near Saint-Armand, along the border with Vermont. Defeated, he took refuge in Vermont.

contains chronicles of various episodes of the rebellion, along with stories and poems celebrating popular uprisings against governments in Canada or Europe. The journal also offers Canadian news, articles translated from foreign newspapers and advertisements. The vast majority of the newspaper is written in French, but each issue contains at least one article in English, often a translation of the most important article of the issue. Duvernay himself wrote most of the texts of t!
he Patriote canadien, which reflects the political thought of the publisher, as well as the various issues faced by the exiled patriots living in the United States in the 1830-1840s. However, Le Patriote canadien also offers more general reflections on education, agriculture and industrialization.

The issue for September 4, 1839, includes a remarkably rich bilingual “topographical notice” which gives a detailed, description Burlington on the front page.

For the complete list of Vermont’s historical newspapers in Chronicling America, see: http://chroniclingamerica.loc.gov/newspapers/vermont/