Counting down to Halloween, we’ve put together a list of new books available at Howe Library to get you in the spooky mood. Whether you’re looking for horror or just some supernatural fun, check out these books! 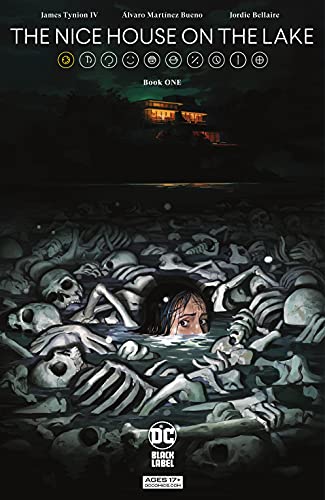 The nice house on the lake, vol. 1 by James Tynion IV, writer ; Álvaro Martínez Bueno, artist
"Everyone who was invited to the house knows Walter--well, they know him a little, anyway. Some met him in childhood; some met him months ago. And Walter's always been a little...off. But after the hardest year of their lives, nobody was going to turn down Walter's invitation to an astonishingly beautiful house in the woods, overlooking an enormous sylvan lake. It's beautiful, it's opulent, it's private--so a week of putting up with Walter's weird little schemes and nicknames in exchange for the vacation of a lifetime? Why not? All of them were at that moment in their lives when they could feel themselves pulling away from their other friends; wouldn't a chance to reconnect be...nice? In The Nice House on the Lake, the overriding anxieties of the 21st century get a terrifying new face-and it might just be the face of the person you once trusted most." 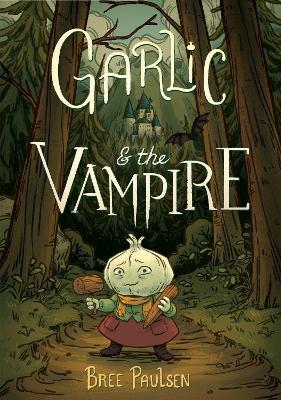 Garlic & the vampire by Bree Paulsen
“Garlic must believe in herself to confront a bloodthirsty vampire who has moved into a nearby castle, in this humorous and heartwarming story that reminds readers that strangers are not always as scary as they seem.” 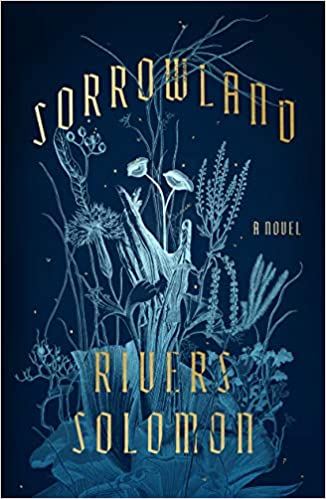 Sorrowland by Rivers Solomon
“Vern escapes the religious compound where she was raised and gives birth to twins in the forest, raising them away from the influence of the outside world. Her community won't let her go that easily, however, and as they pursue, she breaks the boundaries of humanity, changing her body in uncanny ways in order to protect her family.” 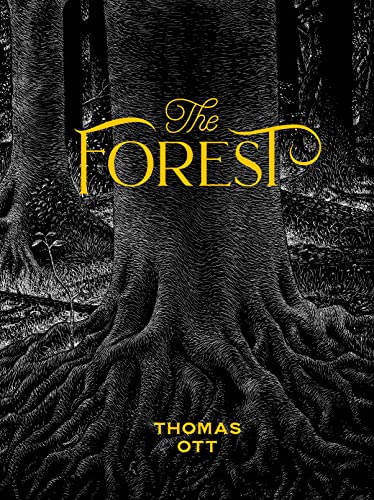 The forest by Thomas Ott
“The Forest is a graphic novella told via twenty-five singular illustrations, without words, of which only Swiss artist Thomas Ott is capable. A young boy sneaks away from a family funeral and sinks into the forest depths, where he confronts man's greatest fear and must choose his path. Drawing with a technique called scratchboard, where a white surface is covered with a black layer and scratched away, Ott creates images out of negative space to harrowing effect. In Ott's hands, the medium becomes the perfect vessel for his eerie, horror-imbued morality tales. This gorgeous volume will be printed on heavy art paper with Pantone Black ink to best showcase every exquisite detail of Ott's virtuosic talent.” 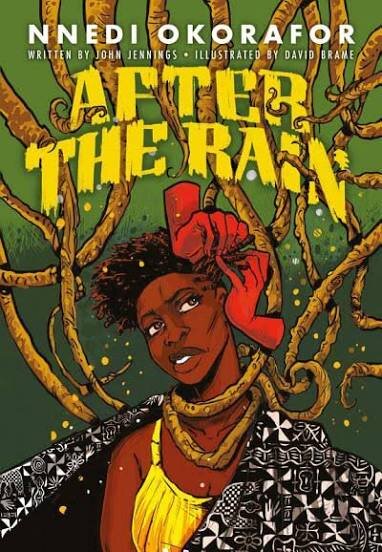 After the rain; adapted from the short story "On the road" by Nnedi Okorafor ; written by John Jennings ; illustrated by David Brame
“The drama takes place in a small Nigerian town during a violent and unexpected storm. A Nigerian-American woman named Chioma answers a knock at her door and is horrified to see a boy with a severe head wound standing at her doorstep. He reaches for her, and his touch burns like fire. Something is very wrong. Haunted and hunted, Chioma must embrace her heritage in order to survive. John Jennings and David Brame's graphic novel collaboration uses bold art and colors to powerfully tell this tale of identity and destiny.” 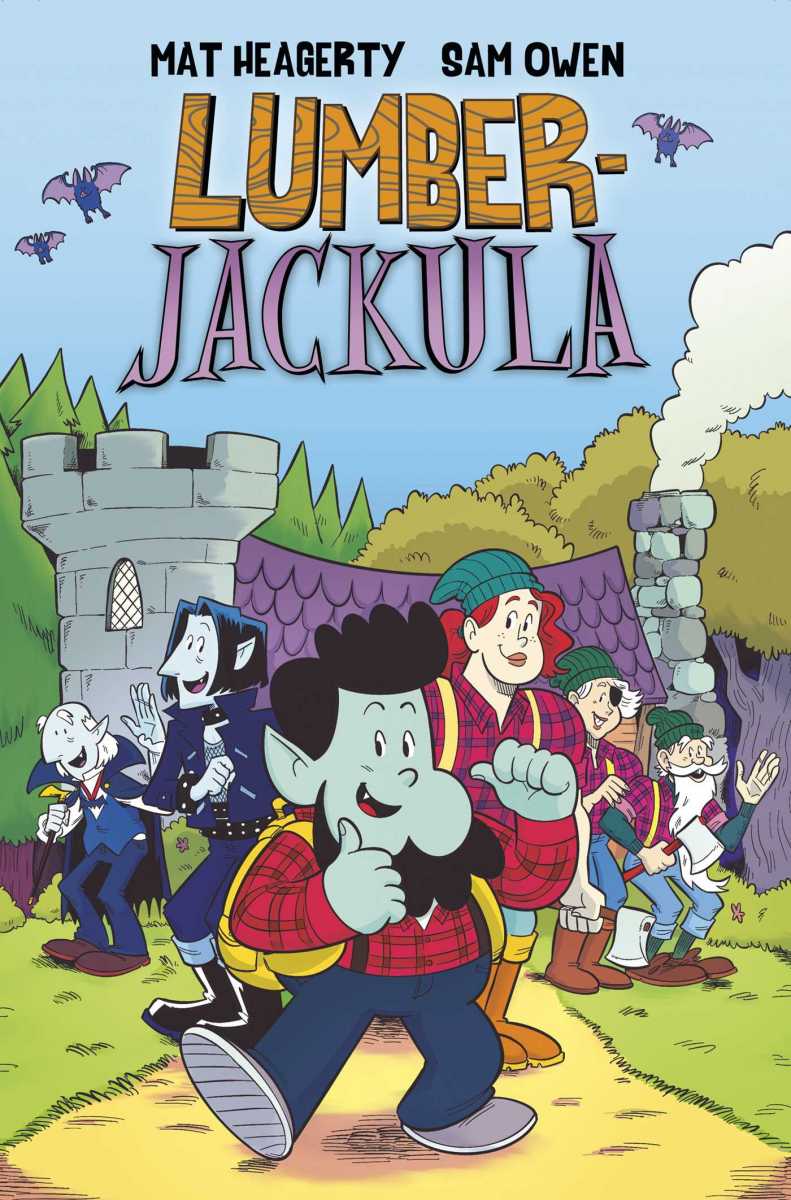 Lumberjackula by Mat Heagerty, Sam Owen
“Jack is in a pickle. His lumberjack mom wants him to go to Mighty Log Lumberjack Prep to learn how to chop wood and wear flannel. His vampire dad wants him to go to Sorrow's Gloom Vampire School to learn how to turn into a bat and drink blood-orange juice. And Jack has a secret: what he really wants to do is dance. When he finds out about Tip Tap Twinkle Toes Dance Academy from new friend Plenty, Jack feels he's finally found the place where he can be his true self. But he's too afraid of disappointing his family to tell them. What's a half-lumberjack, half-vampire boy to do? To summon the confidence to pursue his dreams, Jack will have to embrace every part of himself -- his lumberjack toughness, his vampire eeriness, and most especially his awesome dance moves.” 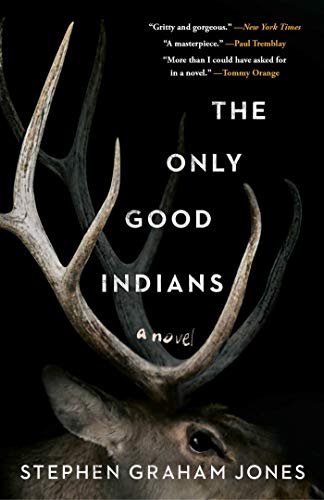 The only good Indians : a novel by Stephen Graham Jones
"Peter Straub's Ghost Story meets Liane Moriarty's Big Little Lies in this American Indian horror story of revenge on the Blackfeet Indian Reservation. Four American Indian men from the Blackfeet Nation, who were childhood friends, find themselves in a desperate struggle for their lives, against an entity that wants to exact revenge upon them for what they did during an elk hunt ten years earlier by killing them, their families, and friends." 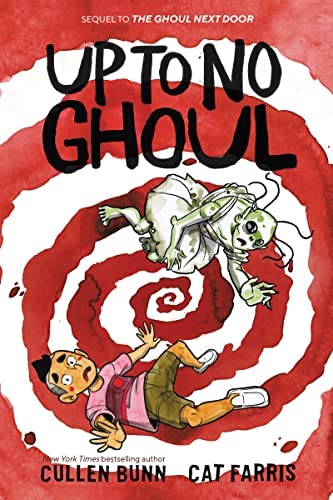 Up to no ghoul by Cullen Bunn & Cat Farris
"In this thrilling and spooky middle grade graphic novel companion to The Ghoul Next Door by New York Times bestselling author Cullen Bunn and Cat Ferris, Lavinia and Grey team up again to solve the town's mystery. Ever wake up in the middle of the night to awful nightmares about vampires? When a mysterious blood bank rolls into town, Grey can't help but get an eerie feeling. Could it be linked to his nightmares about vampires? After some investigating, Grey learns it's something more sinister than he could ever imagine ... and there's only one creature who can help him--Lavinia. Despite the fact they are forbidden to talk to one another again, this spooky mystery is bigger than any promises between the ghouls and humans. This fun, lightly spooky adventure is a good Halloween read but is also the perfect graphic novel read all year round. It's a wonderful escape from everyday life, providing readers with a good scare and plenty of laughter." 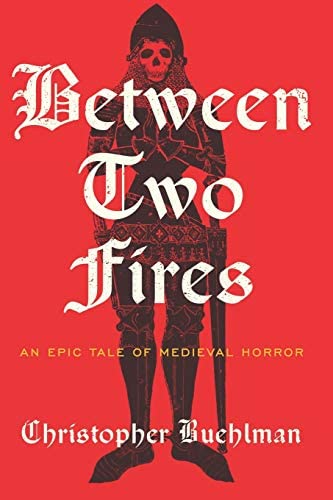 Between Two Fires : an epic tale of medieval horror by Christopher Buehlman
“The year is 1348. Thomas, a disgraced knight, has found a young girl alone in a dead Norman village. An orphan of the Black Death, and an almost unnerving picture of innocence, she tells Thomas that plague is only part of a larger cataclysm--that the fallen angels under Lucifer are rising in a second war on heaven, and that the world of men has fallen behind the lines of conflict. Is it delirium or is it faith? She believes she has seen the angels of God. She believes the righteous dead speak to her in dreams. And now she has convinced the faithless Thomas to shepherd her across a depraved landscape to Avignon.”