“Having free and searchable content from Vermont newspapers means a whole lot to Vermonters. I have seen people uncovering gems and facts about their ancestors that were previously unknown. It’s a valuable primary resource for family historians, teachers, students, and researchers,” said VTDNP project librarian Erenst Anip. END_OF_DOCUMENT_TOKEN_TO_BE_REPLACED

We are pleased to announce our Phase III newspaper titles:

*- indicates a continuation of a previously digitized title run

The above titles will add at least another 100,000 pages of Vermont newspapers to Chronicling America; this work will be completed by the middle of summer 2016. By the end of this phase, an estimated total of 370,000 pages and 73 titles from Vermont newspapers will be available online, for free, and searchable worldwide.

This remarkable amount of Vermont historic newspapers online would not be possible without the support of the National Endowment for the Humanities, the Library of Congress and our state partners: Ilsley Public Library, Vermont Historical Society, Vermont Department of Libraries, and the University of Vermont. We are indebted, too, to those involved in our Advisory Council and Project Management Group.

Some sneak peak article clippings from our Phase III titles: 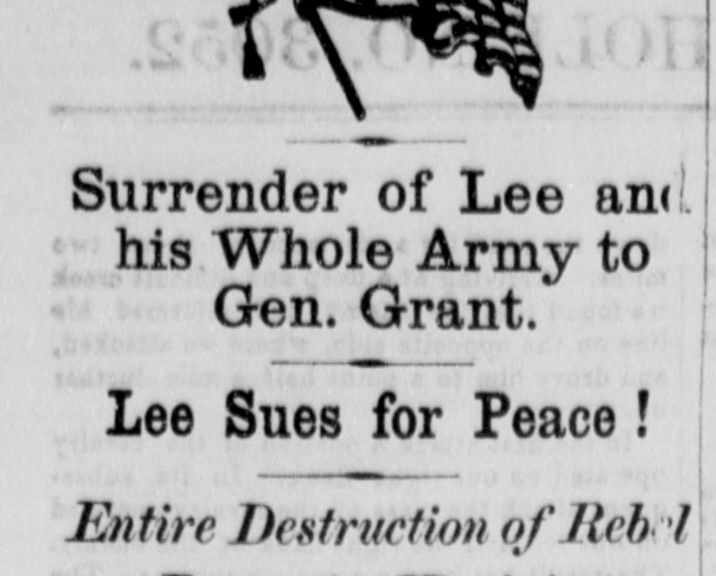 “When this cruel war is over,  praying then to meet again,” went the chorus of a popular Civil War song written by Henry Tucker in 1863. Those words encapsulated so much of what the war was to so many on the war front and at home: a seemingly endless period of waiting, worrying, and hoping. Yet the war in 1863 was only half over. The American Civil War stretched on and on, for four long, bloody years. The beginning of April 1865, though, 150 years ago, marked the Civil War’s decline with decisiveness.

Union victory seemed relatively assured after General Sherman’s March to the Sea in the autumn of 1864. By early 1865, the South did not have the numbers, nor the wealth or resources of the North, to sustain the rebellion much longer. END_OF_DOCUMENT_TOKEN_TO_BE_REPLACED

We’re excited to be leading a workshop at the annual Vermont K-12 Edtech Conference at Champlain College in Burlington on May 21st and 22nd! This year’s theme is Dynamic Landscapes: Do, Make, and Create! The two-day conference is sponsored by VITA-Learn, the VSLA (Vermont State Library Association) and the VT AOE (Agency of Education), and is open to Vermont teachers, librarians, administrators, and tech specialists in K-12 schools.

We’ll be speaking on how to use historic newspaper content from Chronicling America in the classroom on Thursday, May 21st at 11 am (D1 Thursday Session 2A). To learn more about our talk and sign-up for our session (if you’re already registered), visit the session website.

For information on the conference and how to register, visit the Dynamic Landscapes website. Hope to see you there!

Visit our For Educators page to download lessons, view tutorials and more!