END_OF_DOCUMENT_TOKEN_TO_BE_REPLACED

“In Vermont the hills are source of fertility to the bottom lands, and will be forever. The valley of the Nile was referred to. The same process is going on here. We want farmers to feel that farming is the best profession, and Vermont is the best state to farm in.”  (From the State Board of Agriculture, Manufactures and Mining meeting notes published in the Vermont Farmer, February 18, 1876, p. 1)

Farming has long been an established part of Vermont culture, economy, and community, and this is clearly demonstrated in the publication of the Vermont Farmer from 1870 to 1877 in Newport, Vermont.  As a supplement to VTDNP’s contribution to the newest exhibit up at UVM Bailey-Howe Library, “Growing Fields,” we thought we would share a little more about the Vermont Farmer, a historic Vermont newspaper that certainly testifies to the notion that Vermonters in the past, as in the present, have deep roots and interest in agriculture as a livelihood. 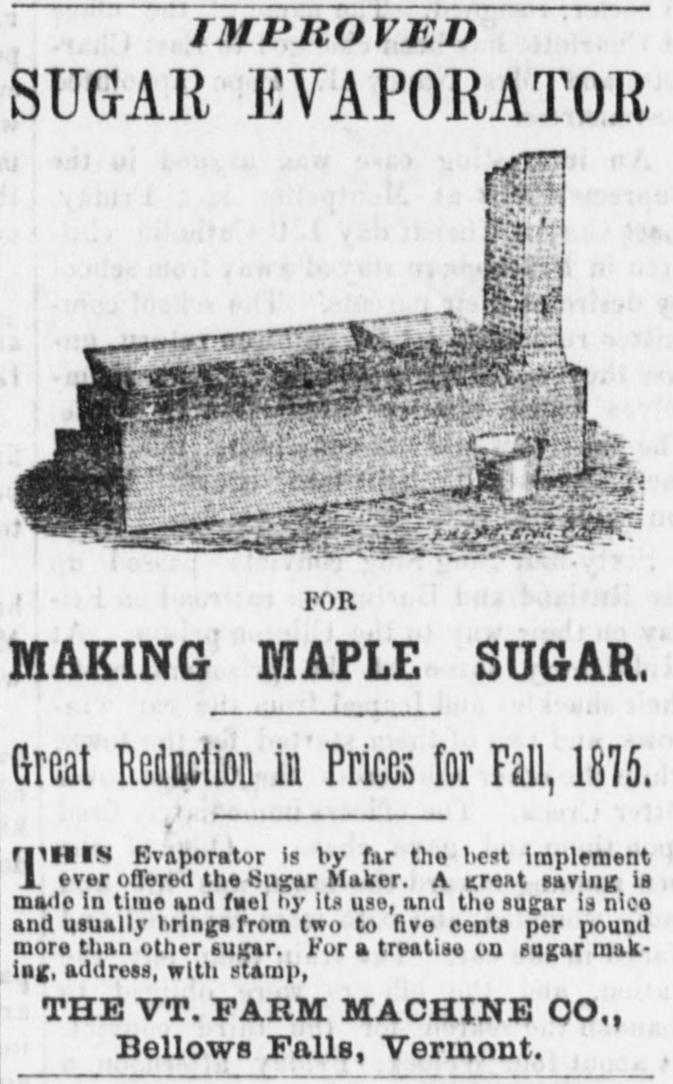 The Vermont Farmer was, as its banner indicated, “an agricultural and family newspaper for the ruralists of the Green Mountain State.” Published weekly, it included a myriad of topics for the farm family in Vermont in the late nineteenth century, including news about fairs, markets, politics, strategies, technology, and more. People from all over Vermont subscribed, wrote, read, and contributed to the Vermont Farmer; at its height, over 3,500 people were subscribed.

The newspaper covered all kinds of farming, including, as shown in this advertisement from 1875, maple sugaring. It thoughtfully addressed agricultural topics ranging from maintaining bee hives to the varied benefits of different types of cows.

Of particular interest, the newspaper, as its banner indicates, made an effort to include materials of interest for all members of the farm family. In most issues of the paper, a “Ladies’ Department” column offered poems, stories, and advice for the farm wife and daughter on the farm. In the clipping to the left from 1874, a poem sent from woman in Waterbury Center, Vermont, demonstrates her clear preference for gingham over ruffles as the ideal apron for the “Farmer’s Wife.” 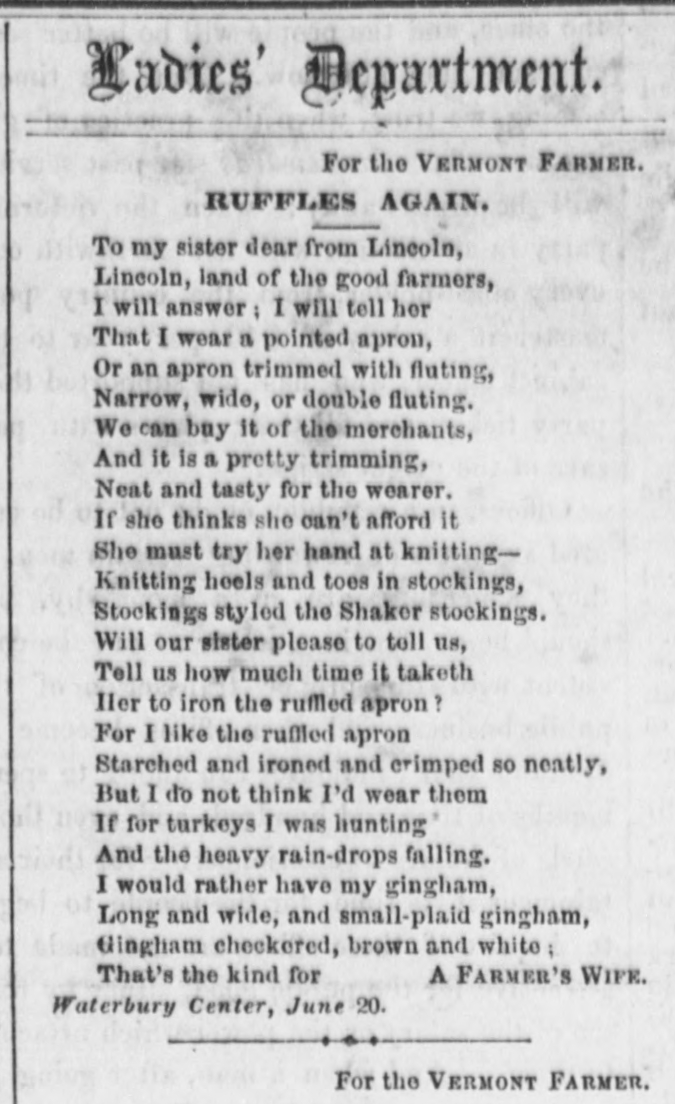 The Vermont Farmer, through its advertisements and news columns, also sheds light on the developing technologies and strategies for farming. In the image below to the left, Gray & Sons from Middetown, Vermont, showcases a variety of machines for the farmer to enhance production on his farm. To the right, a new wheel rake, “The Gleaner,” is advertised in 1875 as indispensable for the farmer. 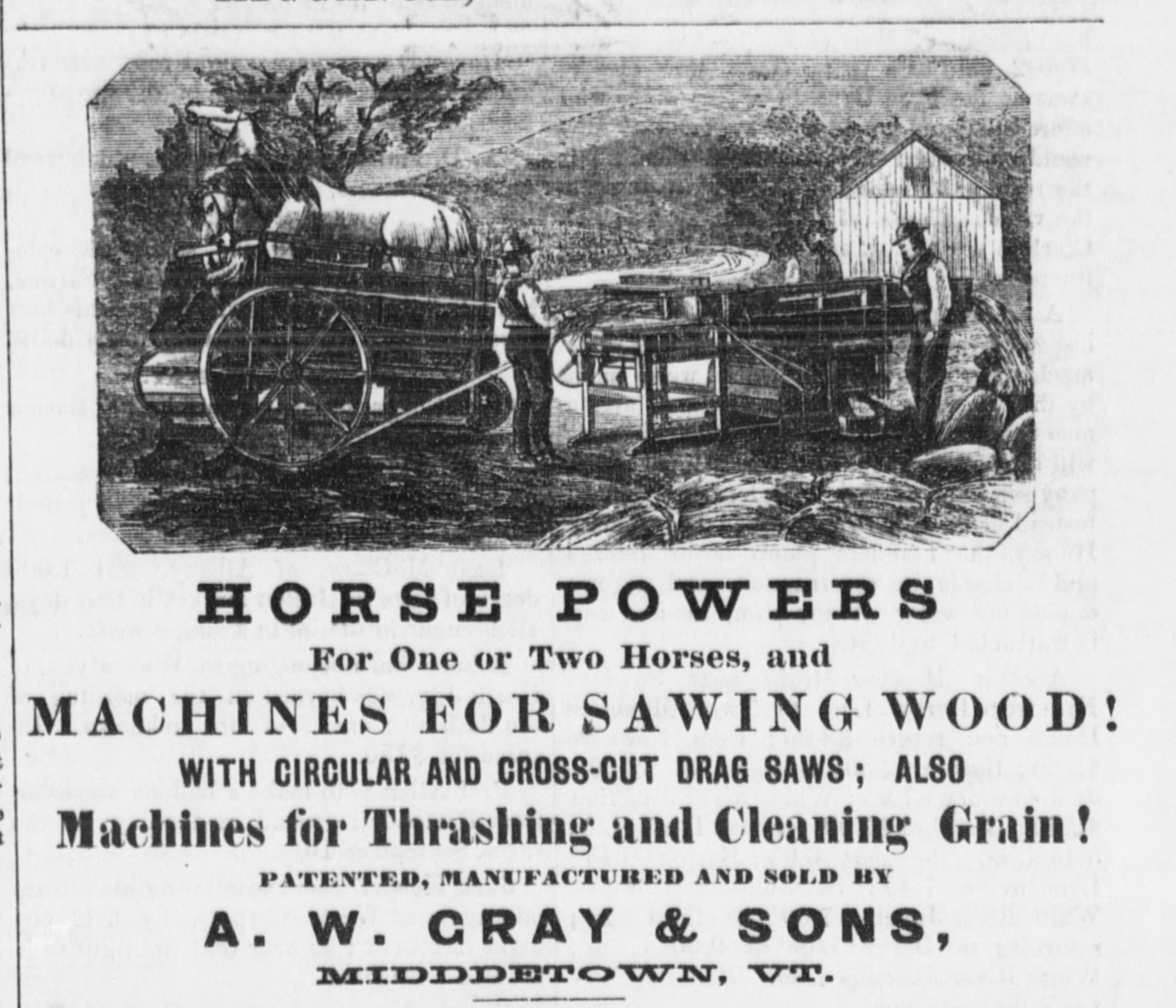 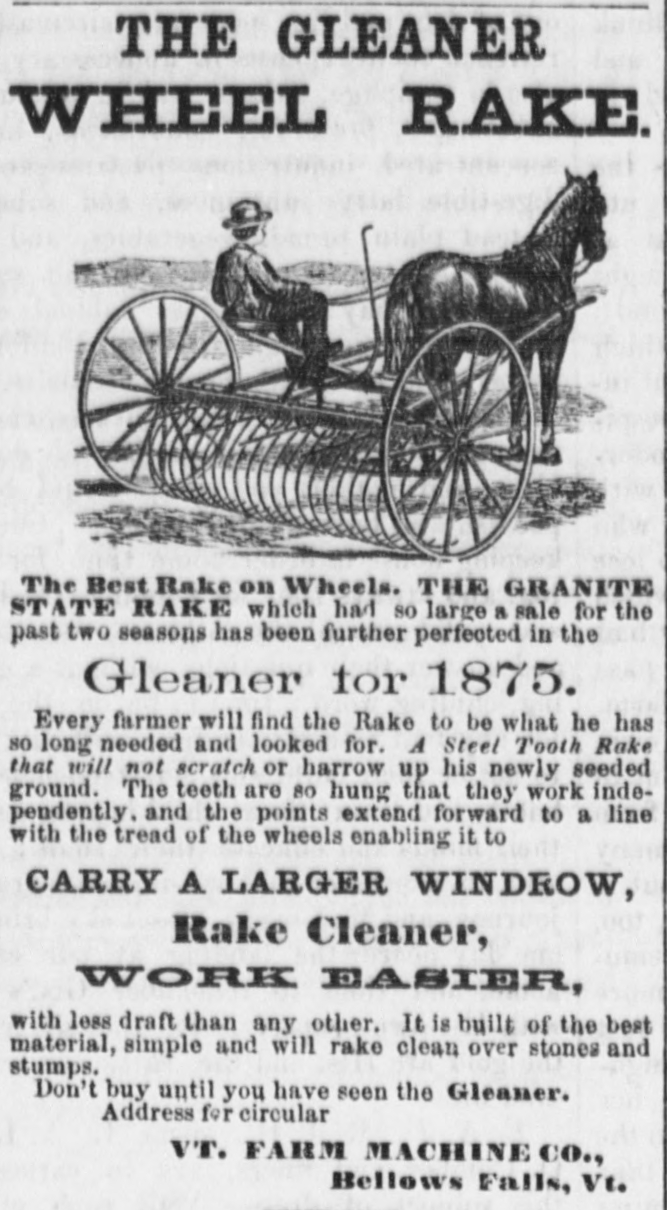 This newspaper provides a rare glimpse into Vermont farming culture of the 1870’s. It is clear in reading any issue of this paper that it was strongly inclusive of all audience members in the Vermont farming community, from the young boy on the farm, to the farm wife, to the politician, to the farmer. You can browse issues of this fascinating newspaper online on Chronicling America.

We’ll end this post with some tasty pie and cake recipes from the October 28, 1871 issue (Let us know if you try them!): 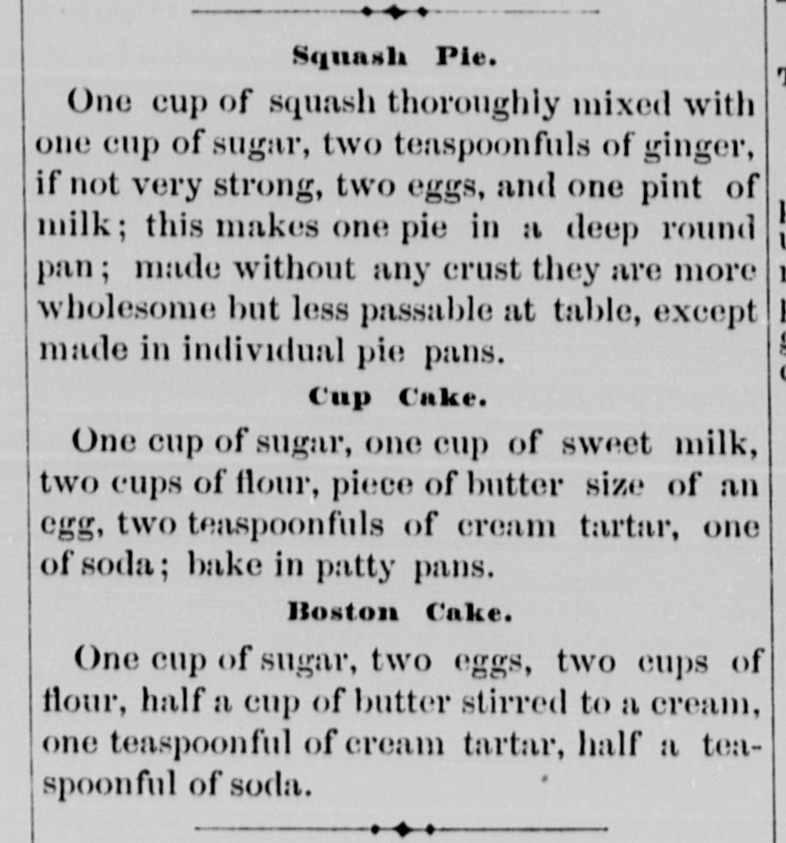