Richard H. Allen’s new book focuses on the life of Truman Crossman Naramore (1838-1895), born in Charlotte, Vermont. After serving in the Vermont cavalry in the Civil War (and surviving six months in the notorious Andersonville prison), he returned to live in Williston for the next nineteen years–here, he married, had five children, established Grange chapters, and began inventing. Naramore secured a range of patents for his inventions, mostly farm equipment, and teamed up with the St. Albans Foundry to produce his products. In 1884, he moved out southern California and got involved with the real estate boom in Los Angeles. He met an untimely end there in 1895.

VTDNP: How did you discover Chronicling America?

Allen: Through the Special Collections staff at the University of Vermont Libraries.

VTDNP: How did Chronicling America assist with your research for your upcoming book? Are there any specific stories/articles or newspaper titles that were particularly helpful and/or interesting?

Allen: Truman Naramore made tremendous use of the available newspapers to advertise his inventions, promote Grange issues, hold forth on farming techniques, and generally keep his name in front of the public, locally and state-wide. The Vermont Farmer newspaper, published in the 1870s, was a great source of material on his activities.

After Naramore moved to Los Angeles, I traced a good deal of his activities through want-ads and news bits in the LA papers. 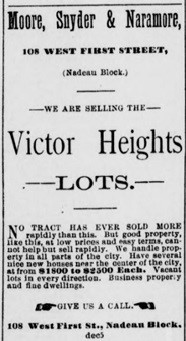 VTDNP: Have you used Chronicling America for anything else, such as additional genealogy research?

Allen: Occasionally, but not a great deal.

VTDNP: Do you have a favorite Vermont newspaper title?

Allen: Yes, this one:

The first issue of the weekly Vermont Farmer appeared in December 1870, with a banner proclaiming that it was “an agricultural and family newspaper for the ruralists of the Green Mountain State.”

I love the term “ruralists.”

VTDNP: Where can people find your book?

Allen: In local bookstores and from the Chittenden County Historical Society ( cchsvt@gmail.com). Out this fall: Ambition and Grit: The Life of Truman Naramore, Civil War Veteran and Entrepreneur by Richard H. Allen

Allen: I would love to see Chronicling America expand more into the 20th century. I hope that is a plan for the future.

Thank you to Richard H. Allen for his time!