>From 1898 to 1903, Henry C. Whitaker edited the Barre Evening Telegram, which will soon be available in Chronicling America. Barre was the center of Vermont’s thriving granite industry, with a significant population of Scottish and Italian immigrants, and the Telegram reported on the granite business, union and labor issues, and immigrant activities. For a very brief period during Whitaker’s tenure, the Telegram included an Italian language section, “Parte Italiana.” Whitaker invited Salvatore Pallavicini to compile the section for the city’s rapidly expanding Italian colony. Pallavicini was an interesting choice, as he was active in the transnational Italian anarchist network.

Pallavicini is somewhat obscure in the historical record. It’s not known when he came to the United States, but sources report that he published anarchist Pietro Gori’s play Primo Maggio and a newspaper, Lo Scalpellino (The Stonecutter) in Barre in 1896. (Note: An Italian paper of the same name was published around 1915 in Barre.)  He represented New York’s Italian Typographical Union at an 1897 rally celebrating the assassination of a Spanish politician, and also supported striking textile workers in Summit, New Jersey during the summer of 1898. During the same month that he was compiling “Parte Italiana” for the Telegram, he contributed two articles to La Question Sociale, a leading anarchist paper published in Paterson, New Jersey.

In the first issue of “Parte Italiana,” Pallavicini promised that the news would be presented in a neutral manner, but in the January 2, 1899 issue, he filled most of the half-page section with an article in which he wondered if 1899 would be the year that workers would rise against tyrants. The Telegram ended the Italian section without comment, although Italian advertisements for local businesses ran for several more weeks.

Later in January, the Telegram ran advertisements for a lecture series by the anarchist and activist Emma Goldman. Pallavicini was her host, and she remembered him as “a cultivated man, well-informed not only on the international labor movement, but also on the new tendencies in Italian art and letters.” Goldman delivered three of four planned lectures. The Telegram reported favorably on the first one, but did not comment on the next two. Barre police canceled the fourth lecture, but local anarchists—perhaps including Pallavicini—printed and distributed copies of her speech.

The 1899 Barre city directory indicates that Pallavicini lived at 47 Granite Street, across from the site where the Socialist Labor Party hall would soon stand. Vermont naturalization records show that Salvatore Pallavicini, born 1851 in Italy, became an American citizen in 1899.  An ad in the Telegram indicates that he worked for a local wood and coal dealer, serving as an agent to the Italian colony.  In 1900, the city directory noted that Pallavicini had left the United States for France, where he died in 1901. After his death, newspapers and police reports implicated him in the 1901 assassination of Italy’s King Umberto I. 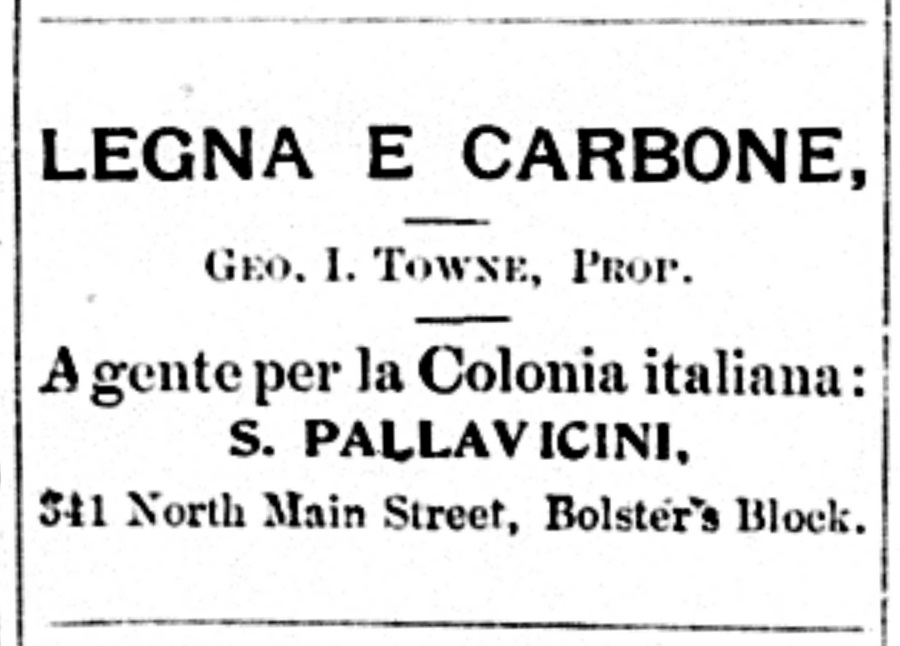